A quick history of the cafetiere

Cafetiere is a French noun for a coffee pot and if you ask for a cafetiere in a kitchenware shop in France you may be offered a range of different coffee makers and not just a cafetiere with a plunger. In fact, cafetieres are rather hard to find in France as they often prefer other methods. In other countries they often have other names; in particular they are called French Press in North America, Coffee Press or Plunger in Australia, Kaffeepresse in Germany and many more names besides.

There is a story, perhaps apocryphal, that an old Frenchman would go on walks to escape his nagging wife.

The first Cafetière à Piston to give its full French name may have originated in France from the 1850s. There is a story, perhaps apocryphal, that an old Frenchman would go on walks to escape his nagging wife. He would take a tin coffee pot with him and boil up a brew over a fire. He found that floating coffee grounds made the coffee difficult to drink and improvised a plunger with some wire gauze to catch the unpalatable coffee grounds. The rest is history, so they say… except it wasn’t.

It seems that the official history of the cafetiere starts with Messers Henri-Otto Mayer and Jacques-Victor Delforge, who filed the first patent for a device that looked like a cafetiere early on in 1852.

The first commercially successful device (one that was actually produced) was made by another Frenchman, Louis Forest. The Cafeolette was launched in 1913 sold in the Paris department stores, Bon Marché and Printemps. 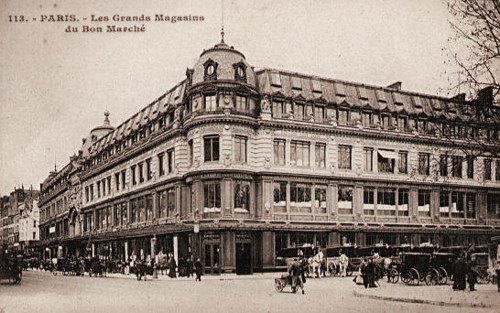 The Cafeolette was a small pot with a piston, which included a basic metal filter with small holes in it. Unlike today’s cafetieres, it used hot milk poured over ground coffee. Similarly to cafetiere coffe, you then left it to brew for a couple minutes ‘plunging’ and then drank the ‘cafe au lait’ immediately.

It was was much later that Attilio Calimani and Giulio Monet filed two patents in 1928 and 1933 for a design that is clearly the forbear of todays cafetiere. The second of these patents (shown below), goes into detail around the ‘filter’ to stop the coffee escaping. In many ways this was the big innovation the was the beginning of what we know as the modern cafetiere. 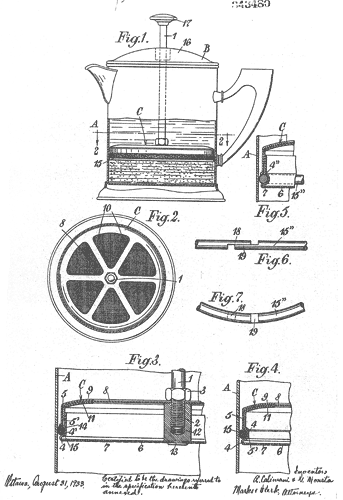 In 1958 a Swiss Italian designer called Faliero Bondanini patented a version with a number of  design modifications and manufactured cafetière in France branded Melior… this is the one that Michael Caine uses one in the film the Ipcress File in 1965.

As well as Melior a British company called Household Articles Ltd also began to import cafetieres under the brand name ‘La Cafetiere’ and at around the same time a Danish kitchenware company saw the potential of the cafetiere introducing their own version: the Bodum Chambord.

Instant coffee remained the ‘go to’ method of coffee preparation in the 1970s and 1980s although there was an increase in the want for the taste of ‘real coffee’, mainly through filter coffee using coffee percolators. From these beginnings cafetieres have grown in popularity and found their way into most households in the UK (as well as being popular in the US and around the world).

Today Cafetieres are seen as a simple and easy way to prepare fresh coffee and are now commonplace. The simple glass cafetiere has been added to by stainless steel ‘pots’ and fine double filters resulting in coffee without any sediment. We see double walled glass cafetieres to keep the coffee hotter for longer.

No one likes a pot full of coffee grounds and the bottom full of ‘sludge’ (useful sludge, but sludge never-the-less). This is where Scoof comes in!

One innovation that everyone wants is a way to clean the cafetiere simply and without mess. No one likes a pot full of coffee grounds and the bottom full of ‘sludge’ (useful sludge, but sludge never-the-less). This is where Scoof comes in!

Scoof not only stirs and improves the taste of your coffee, but also cleans your cafetiere easily. Scoof is designed to lift out 95% of the waste wthout mess. Just twist the handle, lift out the grounds and repeat a couple of times. The collected coffee is good to go to the food waste bin, kept for fertiliser or a host of other uses. 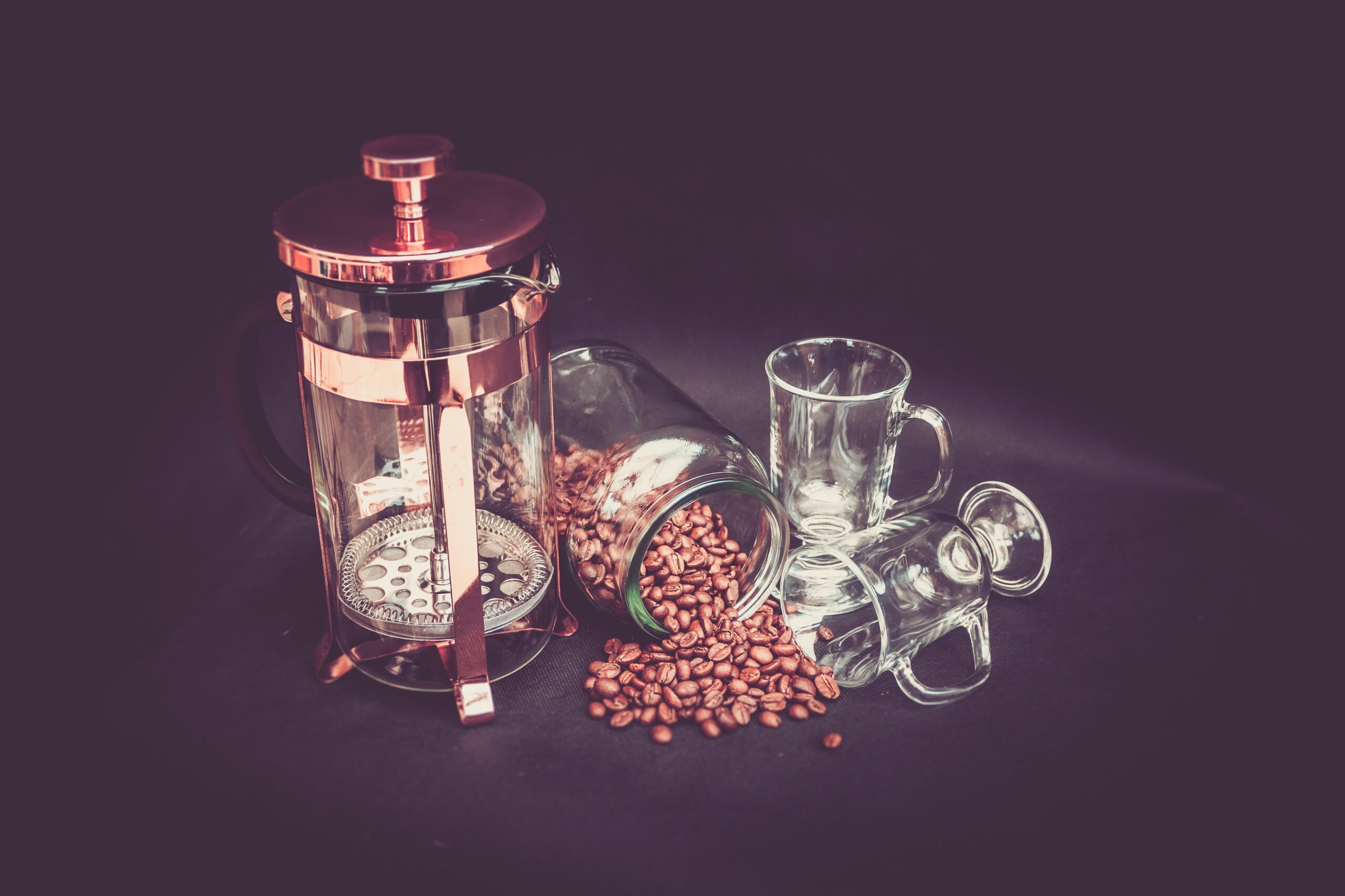 How to make great cafetiere coffee 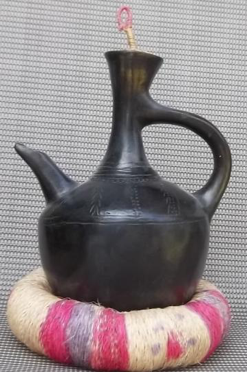 Coffee brewing though the ages 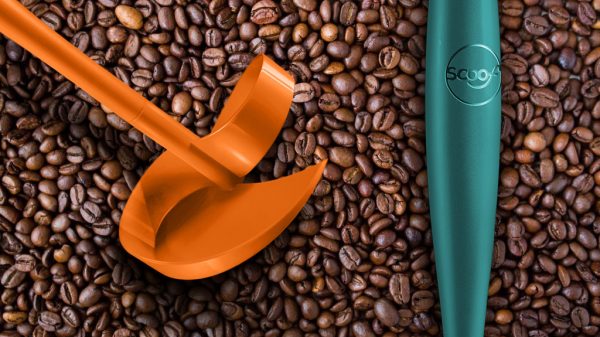 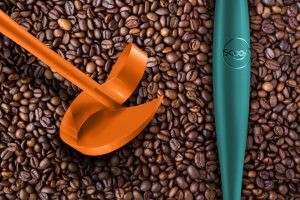 Coffee brewing though the ages

Joe-Scoof
Joe Partridge is the founder of Just So Ideas and creator of Scoof®, designed and produced in the UK.

This website uses cookies to improve your experience while you navigate through the website. Out of these, the cookies that are categorized as necessary are stored on your browser as they are essential for the working of basic functionalities of the website. We also use third-party cookies that help us analyze and understand how you use this website. These cookies will be stored in your browser only with your consent. You also have the option to opt-out of these cookies. But opting out of some of these cookies may affect your browsing experience.
Necessary Always Enabled
Necessary cookies are absolutely essential for the website to function properly. This category only includes cookies that ensures basic functionalities and security features of the website. These cookies do not store any personal information.
Non-necessary
Any cookies that may not be particularly necessary for the website to function and is used specifically to collect user personal data via analytics, ads, other embedded contents are termed as non-necessary cookies. It is mandatory to procure user consent prior to running these cookies on your website.
SAVE & ACCEPT